Don’t settle for a local maximum 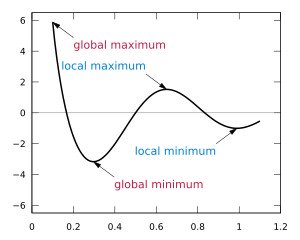 Life is not linear, but rather a succession of ups and downs. Unfortunately, most of us settle for things that most likely belong to a “local maximum”. Once you’ve reached a local maximum, to get to the next local maximum, you may have to descend, to climb higher again. Most people are afraid to leave the (local) top, because being at the top is convenient – you can see farther around. When you go down, you can’t see as far, but this is an imperative part of rising up again. Take a leap of faith, and you’ll most likely be rewarded.

How do you know you’ve reached a global maximum? You don’t. And probably you’ll never reach it. But as long as you keep a positive trend in your local maxima, you’re on the right path. There are so many opportunities in this world, it is highly unlikely that there is nothing better for you, than say, your current job. Unless you’re number one on Forbes richest people, you know there’s room for growth. And even when you make it to the top, you can still keep improving. And money is not the norm for defining success and well-being, it’s just easier to quantify and use as an example.